Awards: WASTED won the Read it or Else category in the Coventry Award and was runner-up in the North East Book Award. It is longlisted for the Carnegie Medal and shortlisted for the Manchester, Grampian, Angus, and RED Awards.

Today, I'm over at Chicklish talking about five films that feature chance, luck or fate. Thanks to Luisa Plaja for inviting me! 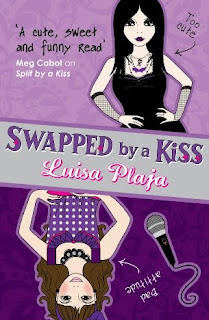 Meanwhile, since Luisa has a book of her own out, I thought I'd get her to guest for me here. After all, you're probably sick of hearing from me now. No, no, I hear you say...

Diary of a Random Writer
by Luisa Plaja, author of teen novels including Swapped by a Kiss – out now!

"The premise of Nicola Morgan’s Wasted has somehow reminded me of the blog I used to keep back in 2006, when I was an unpublished dreamer with two small children and very little time to write. To get myself in the right mood for writing as quickly as possible, I’d pick a word at random from one of my dictionaries.  I’d free-write about something – anything – that popped into my head to do with that word. My one constraint was that I had to write for an imaginary audience. Then I’d post the results on my blog (which did have a real-life audience, but a tiny one.) After that, I’d usually find I was in the right frame of mind to get stuck into the novel, even if it was only for a few minutes. I’d also find that the random word exercise would influence my writing, which was no bad thing. I wrote the first draft of my second novel (Extreme Kissing) almost entirely using the random method, although I used a pile of teen magazines for that instead of a dictionary. It needed a lot of editing afterwards, but it was fun.
In the hopes of showing that this can be an exercise worth doing, even when time is short, here are a few of the old entries from my ‘Random Word’ blog.

Date: 11th January
Subject: Keeping it Surreal
Random Word: 'shake'.
OK. I was shaken awake this morning with a little voice screaming in my ear. "My flannel, mummy, my flannel!" It was my 21-month-old, thankfully back to health at last, but obviously having had a bad dream about someone taking her flannel, which has a picture of a fish on it and is firmly and resolutely HERS. Nobody touches my little girl's flannel, no way no how. I can understand anxiety dreams about flannels, though. I have similar ones about my manuscript. Anyway, I'm exhausted because this happened after a night of being woken up a few times by my son, who was also having bad dreams. "If dinosaurs try to eat me in the night -" "That won’t happen. There are no dinosaurs anymore. They're extinct." "Yes yes, they're ess-tint, but IF they try to eat me, I won't let them. I'll throw my cars at them." "Good. You do that. Go back to sleep." "But mummy, if dinosaurs try to eat YOU, what will you do? You haven't got cars in your room, mummy. What will you DO?"

When you have a baby you think nothing could possibly shake up your life as much ever again, and maybe that's true, but as they grow they seem to keep right on shakin' in lots of little ways.

Date: 2nd February
Subject: I am unwordy
Random Word: 'drain'. So... I used to be a lexicographer. I wrote dictionary definitions for a living. I’d spend my time poring over thousands of examples of word usage, trying to pin words down with only  other words as tools. Working on 'S' was exhausting. It's a big letter. 'B' was mostly a cheery letter - those were happy days. 'D' was a bit depressing - many more 'dis-' words than 'delight'. The worst letter was probably 'U'. We all got stuck for days in a swamp of words beginning with 'un', finding ourselves getting more and more negative by the day. But nothing beat the heady days of working on an idioms dictionary, and working out the difference between phrases like 'laughing your head off' and 'laughing like a drain'. My colleagues and I had to try it out loud en masse, just for the sake of accuracy. If you're feeling down at all, I'd recommend it. Laugh like a drain. Do it now! Just don't laugh your head off, OK?

Date: 10th Feburary
Subject: Child-led editing
Random Word: 'involve'. I've found that the only way to do anything at all with kids around is to involve them. My boy is very good at dusting and my girl sweeps the floor, all Cinderella-like. (Yes, wearing rags and everything.) In fact, they do it better than I ever could, I'm sure. My kids can wash vegetables so well that they need a complete change of clothes afterwards. I was wondering whether, today, my children might try some new, fun activities. For example, I'll read out a page of my manuscript and they'll comment, reminding me that I've already said 'smile' twice in that paragraph and isn't Jake behaving a little out of character? I wonder if this could work with pre-schoolers, or whether it would result in the wordy equivalent of water all over the floor?

Date: 16th February
Subject: Empty mailbox
Random Word: 'empty'. Here's a conversation from the breakfast table.
ME: I can't believe I've been asleep for six whole HOURS, on and off, and not one person has sent me an email.
HIM: (Weary) Hmm.
ME: I mean, what's the point of friends in different time zones if they're not going to send me emails while I'm asleep?
HIM: Mmm.
ME: You know?
HIM: Mm.
ME: I didn't even get any junk mail. Hey, can you imagine when the REAL post arrives and my big brown envelope is there with my manuscript in it? I'm going to be so upset, I'm not even going to want to look at it!
HIM: But you never know...
ME: What? If it's a fat brown self-addressed envelope, it can only be one thing.
HIM: Not necessarily. It could be stuffed with money. And a note saying, "We've kept your manuscript, here is your payment."
ME: Do you think?
HIM: Definitely. In unmarked notes. Hundred pound notes.
ME (hopeful): Or maybe pages of letters from people who've read it and loved it?
HIM (nodding): Who knows?
ME: I think I'm looking forward to seeing that envelope now. (RUNS OFF TO CHECK WHETHER POST HAS ARRIVED)
My empty mailbox is full of possibilities.

Date: 24th February
Subject: Rambling Cupid
Random Word: 'ramble'. Instead of writing some anecdote about a ramble, I think I'll just ramble a bit. I should be able to manage that. I like a good ramble. (With words, I mean. Not so sure about walking.) Oh. But my son just came in and told me about a friend of his having a girlfriend. (They're four years old.) So I asked if he had a girlfriend, and he said no. "First you have to get an arrow in your bottom," he informed me, "and then you fall in love. So that's how it works." And now I really can't think of anything to ramble about. Cupid has struck me speechless.

I don’t blog anymore – unless you count Chicklish, the teen fiction site I edit, where you can find Nicola Morgan’s guest post today. I still sometimes kick-start my writing in a similar random way, though. I highly recommend it.

P.S. The big brown envelope never arrived. Instead, I was offered representation and eventually a book deal. Dinosaurs never invaded my son’s bedroom though he still has a car or two by his bed, and my daughter’s flannel is lying forlorn and forgotten in the bathroom cupboard. I retain the ability to laugh like a drain.

Luisa Plaja’s latest teen novel is Swapped by a Kiss, published by Random House Children’s Books and available from all bookshops.


ME AGAIN: Thanks, Luisa! That was fascinating. I love the idea of the random word prompts. And it fits with the ideas behind Wasted, that it's the tiny things we do that make the difference, in unpredictable ways.


And now, follow me over to Chicklish where I (or possibly my film-mad daughter) talk about films that you might like if you like the idea of randomness and chance. (Is there any such thing as either??)

Email ThisBlogThis!Share to TwitterShare to FacebookShare to Pinterest
Labels: randomness

Brilliant post! Love the idea of writing warm-ups and exercises )despite being too lazy to do them myself!).

Thanks very much, Nik!
And thank you for having me here, Nicola. :)

I really loved this post. It didn't quite make me laugh like a drain, but it did do a gurgling giggle.

Yay, Keris! Thank you, and I really like the sound of the gurgling giggle.

Like Nik, I like this idea of freewriting as a warm up. It's never been something I've been able to get into myself. (Perhaps Nik's lazyness rubs off). But great post. Thank you :)

Catt - I'm with you there. It sounds like such a good idea. It's the sort of thing I maybe would have done years ago but now I think I've become too task-orientated and writing has become work instead of something purely creative.

Either that or, yes, i'm just lazy.

Join me on Facebook for all my book stuff

Promote your Page too

This blog gives you the behind-the-scenes info on Wasted: amazing science and weird ideas, interviews, reviews and competitions.

Want to email me ? Email n@nicolamorgan.co.uk

Do you have a story of a chance event that changed your life? Add it here.

YOUR VIEW OF LUCK